Music for Liturgy and Devotion in Italy around 1600 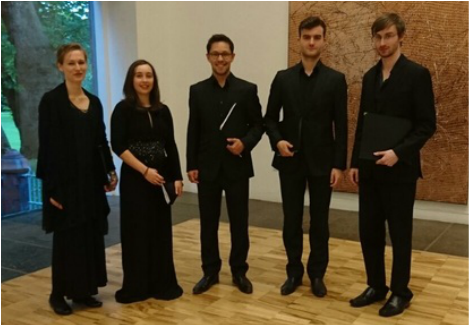 Soprano Leonie Maxwell
Soprano Aimee Presswood
Countertenor/Director Joseph Judge
Tenor Rob Shorter
Bass James Berry
The Turton Consort is a professional vocal ensemble, founded by singers who studied together in Manchester. Since 2013, members of the Consort have performed a variety of solo and ensemble recitals at Turton Tower, a Grade I listed Tudor manor house in Lancashire, from which the Consort takes its name, and other locations around the North West. They recently performed Monteverdi's Fourth Book of Madrigals at St Ann's Church, Manchester, to great acclaim, and sang at the Marcantonio and Raphael exhibition opening night at the Whitworth Art Gallery in September 2016. Upcoming performances include a Christmas Carol recital, at Turton Tower, on Saturday 10th December.

"If there is a heaven, that’s what it sounds like. The soprano voices in particular were like a ray of light through the stained glass windows."  Brigid Callaghan, Local Sound Review